Turns out I’m a good shot. I’m not completely sure why this is so. I think it’s related to being pretty good at three-dimensional spatial conceptualization, which I suppose is a product of my genetic wiring.

Off-the-charts spatial conceptualization’s a handy thing to have for all kinds of things more useful than shooting a gun. Things like figuring out where I am relative to where I want to be on topo maps. Things like rewiring Mama’s house with Romex, and like finding code glitches in the inventory management system they run at work.

It’s true that when I was little I had a BB gun and shot a lot of tin cans, as well as a few birds, I’m now ashamed to say. And sometimes my Daddy took me out to shoot his 22. But he died when I was eight and I didn’t shoot much of anything after that.

So, I’m a pretty good shot, and the only explanation for that, I think, is that it comes naturally.

During college I spent a summer at home helping Mama take care of things. Along the way, maybe late June, this fellow asked me out on a date.

Tom was older than me but Mama said he was from a nice family and worked at the bank and folks said he’d be President of that bank some day. She also said he’d probably take me someplace fancy. Things were pretty spare then at home so I said yes.

Tom wanted to take me to the Gun Club to shoot skeet and then to dinner.

“I have to tell you I don’t know much about shooting a gun,” I told him.

We went to the Gun Club and Tom showed me how to load the shotgun and where the safety was and how to handle it.

“Stand here,” he said. “Tell me when you’re ready and I’ll fire off the pigeons.”

I hitched up my skirt, turned sideways to the course, and planted my feet about as wide apart as my shoulders.

I took a minute to survey the lay of the land.

We were about twenty shooters positioned along a line. Small stone huts separated each marksman’s station, I suppose to keep us from killing each other. The Gun Club was situated next to a park, and its long manicured lawn dropped gently away, extending toward a large stand of mesquite and oak in the far distance. The setting sun warmed whole picture, the green was brilliant, the ochre glowed. I’d have described the place as lovely and peaceful, particularly on that gorgeous evening, except for the BAM BAM BAM of the nonstop fusillade underway.

Once I’d taken all this in I raised the shotgun to my shoulder.

Tom pushed a button and a clay pigeon exploded from behind me, ripped past my left shoulder, flew over my head arching up into the distance, and then landed way out in the freshly mowed carpet grass.

I let the shotgun droop a few seconds while I studied things, chewing my lower lip, not very ladylike I guess. Then I settled in, raised the barrel and said, “Ready.”

Well, I missed the first two. But then I hit sixteen out of the next eighteen. Blew those pigeons to smithereens, littered the ground in front of us with bits and pieces of red clay. 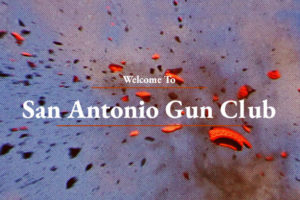 Lowering the barrel to the ground, ever so pleased with myself, I could feel my grin pushing so hard against both ears, my cheeks hurt.

I stepped back, handed the shotgun to Tom, and positioned myself to fire pigeons for him.

He didn’t say much straightaway, busy thinking and taking his own survey of the lay of the land. Then he wondered out loud if maybe we should go on and head out to dinner. You never knew, he said, what with traffic and all, if we might be delayed and then lose our reservation.

“That would be a real shame,” he said.

“You don’t want to take your turn?” I asked, surprised.

We made it to dinner with loads of time to spare, so ended up sitting at the bar for a pretty long time. We talked and talked, him mostly about the bank and me mostly about school. I think maybe Rahner, de Beauvoir and Cixous held less interest to him than he wanted to let on. There were pinball machines in the next room, and so when Tom asked if I’d like to play, I told him sure I’d play. I told him I’d never played before but he could show me how. But then he paused, thought for a few seconds, and then wondered out loud if maybe the bar wouldn’t be more comfortable for me. So we stayed put and he ordered another beer, just one though cause mine was still mostly full.

That was the last time Tom took me skeet shooting.

In fact, that was the last time Tom asked me out.

Mama said how come I always want to scare people off, that don’t I want to be happy in life.

I said I thought I was being nice.